Animé's popularity has exposed more Westerners to Japan as evidenced by “Astro Boy” and Nintendo's multi-billion dollar “Pokémon” franchise. It has also created an increased awareness and interest in the Japanese language and its culture.

A lot of Western animators and filmmakers have emulated the visual style of anime, citing this method as their source of inspiration.

An Overview of Animé

Animé, a Japanese style of motion picture animation, dates back in the early 20th century when Japanese filmmakers toyed with the animation techniques being used in France, Russia, Germany and the United States.

Like the signature use of anamorphic lens in Chinese films, animé became an economical alternative for the underdeveloped live-action industry in Japan. Unlike in the United States, the Japanese film industry remained a small market and suffered from budgeting, location and costing restrictions. Animation allowed artists to create just about any settings and characters.

The oldest known animé was the two-minute footage of a samurai trying to test a new sword on his target, only to experience defeat. This was screened in 1917.

The success of Disney's “Snow White and the Seven Dwarfs” was pivotal to Japanese animators. Mr. Osamu Tezuka a.k.a. the “God of Manga” simplified many of Disney's animation techniques to minimize costs and number of frames in production.

Today, the robot genre is still one of the most common worldwide. From its mainstream acceptance in Japan in the 1980's (“Gundam” and “Macross”), anime gained international acceptance on the 1990's, surging even more in the 2000's.

Animé and Its Characteristics

Facial expressions on the other hand are also distinct in animé compared to western animation. The characters will perform a “fault face” to express shock or surprise. A “stress mark” or a “bulging vein” in the forehead in the form of lines is used to convey anger while upset women will suddenly have a sledge hammer from nowhere and strike someone with it. Massive sweating meant embarrassment.

A Pop Culture on the Rise 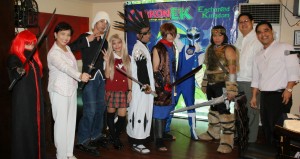 With anime came the emergence of “otakus” or people who have obsessive interests, particularly anime or manga. From this, the “otakon” or “otaku convention” was born in the early 1990's during the Anime Boom, starting with “Anime Expo”, “Animethon”, “Otakon” and “JACON”. These conventions continue to enjoy a large number of attendances until today.

Currently, anime conventions are held regularly in cities across the United States, Asia and Europe. These multi-day events are normally held at convention centers, hotels or campuses.

Riding on this popularity, the country's first world-class theme park is giving a new twist to the popular anime convention by holding it this time at Enchanted Kingdom. “OtakonEK 2008” promises a colorful pop festival of anime, toys, manga, movies, video games, and music amid the park's exciting and spectacular rides and attractions.

Guaranteed to give spice to any anime convention are the cosplayers or costume players. Cosplaying originated in Japan in 1978 and is rapidly gaining popularity in the country. Aside from anime themes, fantasy and science-fiction movies have also become part of cosplaying, owing to the international success of films such as “The Matrix”, “Star Wars”, “Harry Potter” and “The Lord of the Rings”.

Many otakus like to dress up in their favorite characters and even act the part! They prefer to do their own costumes although here in the Philippines, some are commissioned. Costume competitions are regularly held during these conventions.

“OtakonEK 2008” provides a perfect venue for cosplayers as they can come to the park for FREE this September 28, 2008 provided they come in their full costume. Characters from an animation, comics, toys, gaming, TV or movies are accepted. A cosplayer may pre-register at www.toyconph.com/otakonek before September 28, 2008 or register at the park gate near the Group Sales Office on the event day itself from 10:00 AM to 5:00 PM. EK reserves the right to refuse free entrance to those who do not meet the criteria and to those who do not meet the park's standards for wholesome and safe entertainment.

Inquiries may be directed to the Enchanted Kingdom’s Marketing Department at (632) 812-7232 or their website at www.enchantedkingdom.com.ph.

The people managing and supporting WazzupManila are well experienced in the ways of international business and finance. It is therefore not surprising for them to stumble upon investors, both international and local, who are on the lookout for new investment opportunities. Within the past couple of weeks, they were contacted by two European companies who…