Brazilian model Alessandra Ambrosio is one of the most popular spokesperson of Victoria’s Secret. Born in Erechrim, Brazil on April 11, 1981, Alessandra is of Italian and Polish descent. She wanted to be a model at a very young age but was insecure about her appearance, especially of her large ears. She had her ears pinned back through cosmetic surgery when she was 11 but suffered complications two years after. This discouraged Alessandra from having surgery again in the future.

She started modeling when she was 15 and won Brazil’s Elite Model Look, which boosted her career. She appeared on the cover of the Brazilian Elle magazine and got signed up for Millennium GUESS? Campaign. The 5’10 beauty became a cover girl for most of the top international magazines like Harper’s Bazaar and Cosmopolitan and became very much in demand for top brands such as Ralph Lauren, Calvin Klein, Oscar de la Renta and Giorgio Armani. Her ramp appearances include shows for Issey Miyake, Christian Dior and Vivienne Westwood. 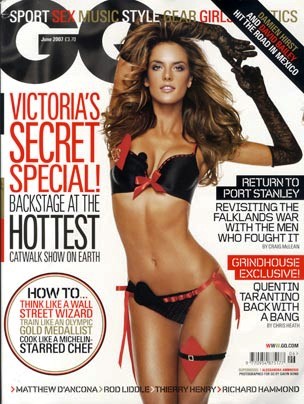 Like all successful models, Alessandra had her share of TV and film exposure. She had cameo appearances in HBO’s Entourage and the James Bond film Casino Royale. She became a guest judge on fellow Angel Heidi Klum’s show Project Runway.

Alessandra lives in New York City and shares an apartment with her sister Aline, who is a lawyer. In August 2008, she gave birth to Anja Louise Ambrosio Mazur, her first child with fiancé Jamie Mazur.